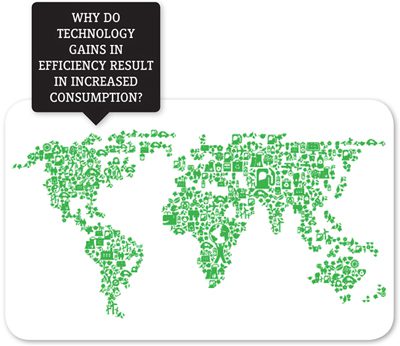 The economic turmoil over the last few years has certainly caused all of us to look at our homes and businesses for ways to operate more efficiently. We ask ourselves “where can we conserve?” and “how can we take advantage of technical innovations that will reduce costs or increase productivity?” These same sorts of questions are being asked by policy makers at various levels of government to encourage or discourage certain types of activities.

As one expands those thoughts from purely personal economic considerations, there are numerous environmental challenges society needs to face. What can be done to order our lives more efficiently so as to reduce our impact on the environment? Various “green” initiatives are focused on reducing our “carbon footprint”, reducing per capita water consumption, recycling packaging materials and certainly reducing energy consumption. The objective seems to be to find a way to require less net consumption, yet maintain a consistent lifestyle.

In fact, the common implicit assumption is that “sustainability” of a resource will automatically follow when, by technological improvements in efficiency, we consume less of the resource. This has a certain logic to it, but over the past year I have been wrestling with whether it is an accurate characterization of the situation. For example, if this assumption is correct, why does overall petroleum consumption continue to rise despite the significant efficiency improvements to automobile, jet and equipment engines over the past 25 years? Obviously, this is due to the fact that more people are using more of the efficient cars, jets, and engines so the aggregate demand goes up. But that begs the question, ‘will sustainability result in the future if technological innovation hasn’t reduced aggregate demand in the past?’ (While this concept can apply to any resource, it is particularly applicable to energy consumption with its implications for our standard of living as well as climate impacts, so I will use it as the primary point of this discussion.)

As I began to casually research the topic, I was intrigued to discover that this same question had been formulated and addressed back in 1865. It seems that Stanley Jevons, a professor of political economy at University College in London, wrestled with the same riddle…why do technology gains in efficiency result in increased consumption? In his day he was concerned that England would run out of coal which would result in a significant drop in their standard of living. His analysis was presented in The Coal Question which is absolutely fascinating. The similarities between coal of Jevons’ day and oil in ours are striking. Can the concepts of Jevons analysis be helpful in characterizing the problems and solutions that we face today? I think they can, but what are the key concepts?

At the outset I should mention that there are fairly vigorous debates among economists as to the net effect of the Jevons Paradox. In the same way that there are Keynesians and Monetarists, there are academics that say Jevons identified a key factor in moving policy forward and others that say it is misguided. As I have read the arguments, I think that Jevons analysis is valuable in clarifying or exposing implicit assumptions and helps improve our approach to resolving some very real problems.

The fundamental premise of the Jevons Paradox is summarized in his book The Coal Question where Jevons states, “it is wholly a confusion of ideas to suppose that the economical use of fuel is equivalent to a diminished consumption. The very contrary is the truth…As a rule, new modes of economy will lead to an increase in consumption.”

Upon reflection it is hard to see why anyone would object to the statement, because it is a fundamental consideration of marginal analysis in economics. Jevons, who interestingly was one of the developers of marginal analysis, begins the Coal Question by noting that the effect of improved efficiency reduces the required fuel for a task which has the effect of reducing cost. He then shows that technology will expand into other areas which will increase production of steel (for example). This will reduce the price of steel which then reduces the cost of trains, factories, etc. Thus, this expands the demand for those additional products and lowers the associated cost which increases the demand for the output. Those activities taken together increase the aggregate demand for fuel so long at the supply of fuel is available. While economists will then argue the effects of substitution, elasticity, regulation, rebound or backfire, the general concept seems to bear out common experience.

This presents a profound paradox that challenges the prevailing sustainability assumption. Taken alone technological innovation and efficiency may not guide us to our ultimate goal of resource sustainability. In fact, Jevons Paradox asserts that it will do just the opposite. This is not to say that technological innovation and efficiency efforts should be ceased. Rather it indicates that while it can be a necessary activity, it is not sufficient in and of itself.

If Jevons Paradox is a correct, or mostly correct, view of the way consumer behavior actually works, what actions need to be taken? I haven’t read any suggestions that I find particularly attractive…which is why I suppose economics is known as the Dismal Science. To reduce the aggregate consumption in the face of increasing populations seeking economic growth is daunting. From scholars who have explored Jevons concepts point to the fact that the solution will involve at a minimum three factors: price, convenience and/or substitution.

First, according to Jevons’ relations, any efficiency gains through technology or innovation must not result in reduced costs. This would imply that some sort of artificial pricing mechanism be attached such as a tariff or tax. However, it can’t stop at that. The tariff cannot be used for other activities that would increase energy consumption. Implementing such a policy in today’s political and economic environment may not be feasible. Still, some compatible incentives must be found.

Second, convenience…or more precisely “inconvenience” must be factored into energy use decisions. The two factors that drive most consumer decisions are the marginal cost of consumption versus the marginal convenience or pleasure of the consumption. For example, while riding a bicycle to work is far less costly than owning/maintaining a car, it is far less convenient for most people who live in the suburbs and certainly limits the range of mobility. Some have suggested that this factor will provide a strong incentive in the future toward urban versus suburban/rural living. Urban environments can be far more energy and resource efficient than the alternatives. It is possible that some of the taxes mentioned above could be used to support more desirable urban environments that reduce the impacts of urban sprawl. The “biophilic” design movement with its corollary biophilic cities is an example of this. (See Suzanne Hunnicutt’s related article in this newsletter).

Finally, substitution of energy sources will play a part. While it would be nice to think that solar or wind generated power will be able to fill this gap, current renewable sources are completely dwarfed by the needs. In addition, the technology and economics of those alternatives are not at a level to support mass adoption at this point. Other energy options are available such as nuclear power. Nuclear power generation will be subject to Jevons Paradox just as fossil fuels are, but it is hard to identify another source that can produce the energy output needed without the climate change impact of fossil fuels. Natural gas is likely to be an intermediate alternative as well, but they all beg the question of how long-term sustainability will be met as the world population grows to 9 or 10 billion people by mid-century.

In summary, Jevons Paradox is a demonstration of the “Law of Unintended Consequences” (Oct-Dec 2011). We use a common efficient energy source to solve the energy problem that Jevons feared, but which has created unanticipated environmental impacts while raising the standard of living for society. In order to maintain that standard of living while reducing the expanding need for fuel, considerable efforts have been made to improve the efficiency of fuel use. However, the very efforts that were developed to save fuel may in fact be increasing its aggregate demand…and at the end of the day, aggregate demand is what counts.

At first glance these are not necessarily happy thoughts, but in order to figure out a problem one has to be able to define the problem. Many times problems and solutions are characterized in a much too linear fashion. We live in a non-linear world with feedback/feedforward loops that can confound solutions that just look at a single problem and a direct solution. In order to develop a rational set of policies to maintain our standard of living while truly addressing fuel and other resource issues, these concepts must be recognized and factored into the solutions.

Dr. Jim Chastain is the CEO and President of Chastain-Skillman, Inc. He has a Bachelor of Science in Civil Engineering (honors) and Master of Engineering from the University of Florida. He also has a Master of Public Health and Ph.D. in Public Health from the University of South Florida. He is a registered Professional Engineer with over 30 years of experience and is a Diplomate of the American Academy of Environmental Engineers. He can be reached at [863] 646-1402 or jrchastain@chastainskillman.com.